I work primarily with OpenStack, AWS, Python, and Go in the context of large distributed systems. High-scale systems and graceful failure handling are my favorite problem classes.

Keyboards and the State of Typing

Back in college, I read a great post on loper-os, Englebart’s Violin which I’m unlikely to do justice to here, but is definitely recommended reading. It focuses on the tools that humans use for potentially billions of hours each day: the keyboard and the mouse.

If you were to show the keyboard attached to your computer to a typist in the 1950’s, the most innovative piece according to them would be the apparently-magical light-emitting diode on the caps lock key (invented 1962). Everything else is the same: the key-per-character usage, the labels, the layout, even the plastics haven’t moved ahead all that much.

I’ll skip the whole “bemoaning the fall of computing to the unworthy” lecture, not just because it reeks of elitism to say that computing professionals are the ones who deserve better keyboards. Plenty of professionals do their job almost exclusively with a keyboard; programmers, writers, paralegals, even nurses spend huge parts of their day typing. To do so with a tool so bound to computing’s prehistory in typewriting, when there was no such thing as “smart” devices.

Shortly after reading it, I tried my hand at building a chorded keyboard called microchord and built a layout to test on mock buttons. After a few hours of practice I realized how much slower a chording system would be, even after practice. Since each keypress requires multiple fingers to work in concert, it’s hard to get as fast as a single-finger button press.

After college, my first foray into “odd keyboards” was the Kinesis Advantage. It beat the standard typewriter staggering, but the “crater” design didn’t work for me. 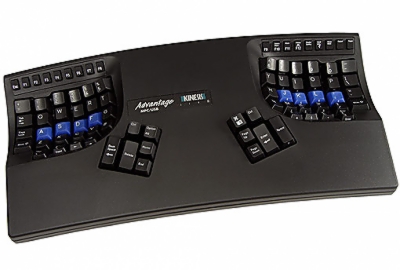 The Ergodox was the first real custom keyboard I built, and it wins hands down (hehe…) for workstation use, but it takes up a ton of desk space and isn’t very portable. Each half takes up about the same amount of space in a bag as a whole tenkeyless board, which makes it a no-go for travel.

The big win on the Ergodox is the community and the open-source firmware options. I chose tmk_keyboard and immediately started adding macros for common hotkeys, like Gnome3’s ctrl-alt-arrow for workspace switching, and the leader keys for tmux and screen.

I think the input methods I use are going to keep evolving, and having firmware-level access means I can take my layout and macros with me across operating systems without extra setup. Most recently, I built a new atreus that I’m just starting to customize. So far, it looks like it will fill the role of non-desk typing since it fits nicely on top of the keyboard of my X201.